I have recently been helping with some Kickstarter campaigns and here is another great “SUCCESS STORY”.  Let’s pull apart some of the reasons why this one succeeded in such a dramatic way. $50,000 was the original target but Leah Cevoli and the team managed to raise over $88,000 (Very Impressive) 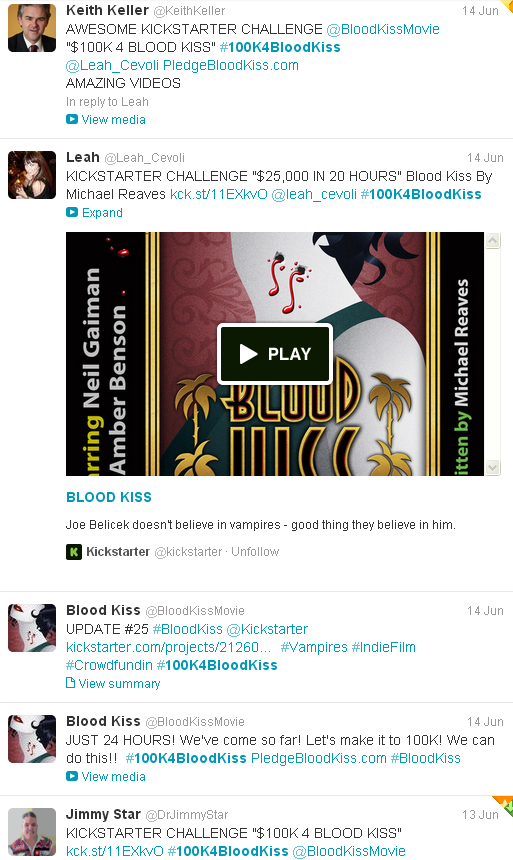 @KeithKeller Thanks Keith. These things really do take a village and a team effort in #socialmedia Every tweet and RT counts!

Some tips here from Leah Cevoli

“There’s no real secret to #Crowdfunding in order to fund you need a crowd! The combined social media followers of the team is of major importance here, but just as important, is to establish social media platforms across the board for the project itself.  I’ve found that twitter is *the* place to do your crowdfunding.  Don’t get me wrong, a large percentage of funding always comes thru Facebook links, but It’s a huge plus to have someone on the team who has massive twitter followers, and is willing to tweet about the campaign.

Immediately establish a #hashtag for your campaign, use a vanity url for your crowdfunding page, and engage and interact everyone you can so that they’ll begin using your hashtag as well.  In my most recent campaign, #BloodKiss, we had an enormous amount of high-profile press in our last 24 hours, including a 3 minute spotlight on the local 11:00 news!

You can’t count on the press though, as there are a 1000 crowdfunding stories a day, and it takes a real strong story to convince the press that your story is unique enough to warrant the coverage, the press is the icing on the cake!   I’ve successfully co-managed 4 campaigns in the past year, with teams of 2 to 10 people, each one is unique, each one has it’s challenges, each one became a full-time job while the campaign was on.

It’s not easy, but it is rewarding, and it allows artists and indie film makers, all over the world, at all skill levels a platform to fund our  wildest dreams.”

If you’re interested in learning more from Leah on Crowdfunding, she offers a one hour, one-on-one consultation on social media, crowdfunding, and a variety of other topics.